Discover the World offers a Discover St Helena Fly-In trip combined with optional extensions in South Africa. Prices start from £1,588 per person for a week-long fly drive, based on two sharing, B&B, including car hire, 4WD adventure excursion, a half-day wildlife cruise, and return Johannesburg to St Helena flights with SA Airlink. Flights from the UK to South Africa start from around £600 per person.

When Napoleon was still a student, he scribbled on the last page of his geography book: ‘St Helena. Small Island.’ Oh, the irony — 30 years later he was exiled and died here. Yet even today, few of us know little more than that. Not even its location. But that’s all set to change. In October 2017, this remote Atlantic outpost welcomed its first commercial flight. Previously only accessible via the RMS St Helena, the journey time has been slashed from five days sailing from South Africa to four hours by air.

It hasn’t been without challenges. The inaugural flight was delayed for over a year due to dangerous wind conditions. The headlines weren’t kind: it was dubbed ‘the world’s most useless airport’ by the British media. Even though downgrading to a smaller plane and training pilots intensively for eight months solved the issue, the airport has struggled to shrug off its shaky start. “Currently, only four pilots in the world are qualified to fly into St Helena,” says Jaco Henning, the South African pilot who landed the maiden flight on 14 October. “It’s classed as a Category C airport — the toughest tier.”

What does quicker access mean for one of the world’s remotest islands? A third the size of the Isle of Wight, some 1,200 miles from the Angolan coast,
St Helena — rather surprisingly — has never been short of visitors. Naturalist Charles Darwin, explorer Captain James Cook, novelist William Thackeray and astronomer Edmond Halley all stayed here. But the island’s most famous guest might never have made it at all.

“It was a sailor who turned the tide of history,” says 81 year-old local guide Basil George, tickling his grey goatee, as we stroll around the docks. “When the Duke of Wellington passed by in 1805 on his way back to England from India, the boat taking him ashore capsized in the rough seas. Three people drowned. Wellington couldn’t swim, but a young boy came to his rescue. If he hadn’t, the Battle of Waterloo might never have happened!” Basil pauses dramatically, to let the full weight of the story sink in.

Now, the island’s own fate is changing. “Before the Suez Canal, 30 ships a day docked here,” continues Basil. Trade had been booming since 1657 when Oliver Cromwell granted the East India Company a charter to govern the island. A small platoon and a gaggle of planters arrived — making it one of Britain’s oldest colonies — and with riches from the passing trade from India they built a fort, castle, St James’ Church and Plantation House. Merchants such as Solomon’s and Thorpe — which still owns stores in the capital, Jamestown — set up shop in the 1790s. 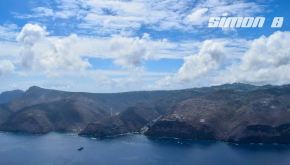