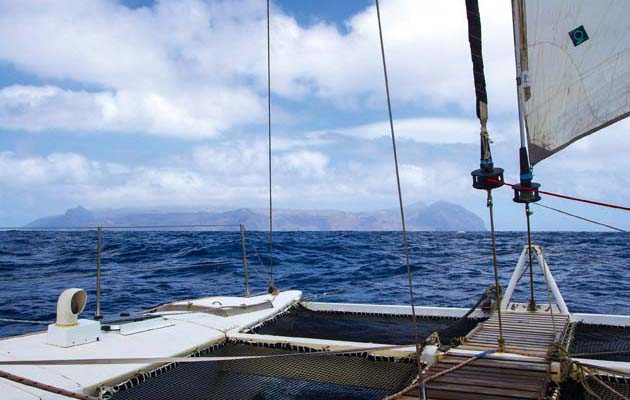 We crossed wakes with Captain Cook 350 miles out from the Namibian coast and 245 years after he set out from Cape Town for the South Atlantic island of Saint Helena. While spending six years sailing in the tropical latitudes, my husband Evan, 14-year-old daughter Maia and I found echoes of the early navigators in ports around the world; from the names of harbours and hills, to monuments and statues.

But to sail the same actual route – matching latitude and longitude while comparing the sea conditions and the daily mileage of the HMS Endeavour with our Woods catamaran Ceilydh – was a first for us.

It’s always a delight when a passage that promises easy sailing lives up to expectation. After the challenge of the Indian Ocean, the mellow South Atlantic felt like a reward. But unlike the much heavier Endeavour, our 40ft catamaran averaged over 6 knots in winds that were 10-12 knots from astern. While he was making 100-mile days, we pulled ahead with 150-mile ones. It seemed the distraction of our cross-century race with Cook would be short lived.