In the heart of the capital, Jamestown (population 600), Constable Cowie is worried about the Christmas traffic; Craig, the dive-master, is checking his emails twice a day; and Lucille, the local taxi magnate, is introducing 24-hour shifts.

For the 4,500 residents of the island, separated from Africa by nearly 2,000 km (1,240 miles) of ocean, the arrival this past weekend of the first ever commercial flight was cause for celebration and marked another step closer to their inclusion in the 21st century.

Saints, as locals are known, only got mobile phones and the Internet 18 months ago, supplementing the five-day boat trip to Cape Town that represented their only connection with the outside world.

Now, there is a weekly flight from Johannesburg – via Namibia’s Windhoek – to the spectacular St. Helena airport, perched precariously on the edge of a cliff. Locals are hoping for a steady trickle of aviation thrill-seekers, French history buffs and whale-watchers.

According to Craig Yon, owner of diving company Into the Blue, a group of Swedish divers who had been contemplating a trip to see whale sharks next year booked within minutes of reading online that the inaugural flight had landed safely.

“Things are really picking up,” he said. “Before, I’d only check my emails once a day. Now I have to check them in the morning and the afternoon.” 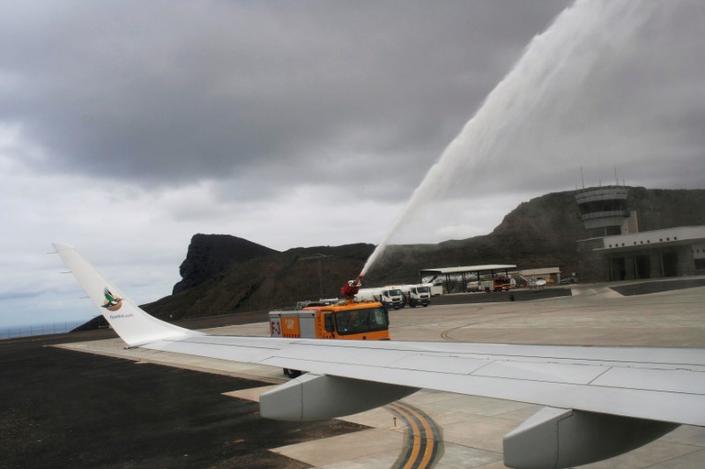 There has been talk since the 1930s of an airport on St. Helena, the involuntary abode of British colonial adversaries ranging from French emperor Napoleon to the Zulu King Dinuzulu kaCetshwayo and 6,000 Afrikaners taken prisoner in the Boer War.

The current site was selected a decade ago after the prime location on the notoriously craggy 16×8 km (10×5 mile) island was ruled out because it was home to an important colony of the endangered wire bird, a type of indigenous plover.

The first test flights were buffeted by vicious cross-winds, making it too dangerous for large aircraft to land and leading to an 18-month delay in its opening, during which time the British press dubbed it the “world’s most useless airport”.

Saturday’s landing, in a 100-seater Embraer, involved a pre-touch-down briefing about emergency “go-around” procedures but passed off smoothly, to the cheers and delight of those on board and hundreds of Saints crammed into the glass-fronted terminal.

“I was quite happy to see the plane land safely because there have been a lot of problems around that, with the wind shear,” said 22-year-old police officer Sophie Cowie, whose beat is managing the traffic on Main St., Jamestown’s one road.

While some in Britain may question the value for money of the airport – more than 60,000 pounds per Saint – for the islanders it has already proved its worth, enabling several emergency medical evacuations, including a newborn child.

However, one possible unintended consequence of more arrivals is the increased spread of disease to an island whose animal and human inhabitants have been protected from many of the world’s germs.

In the past week, the island’s schools have been almost empty due to a bout of flu. Said to have been brought in on the boat from Cape Town, it has laid low 80 percent of pupils.